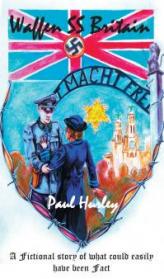 The gloriously sunny month of July has been a busy month for New Generation Publishing authors in the media. A record number of review copies have been sent out on behalf of our authors, generating a flurry of interest and book sales - good news for both publisher and authors!

We would like to offer congratulations to Paul Hurley as the latest New Generation Publishing author to scoop a prestigious award. Paul’s book Waffen SS Britain has been chosen as the Andrew Lownie ‘Literary Agents Pick’ for July 2014.

The aim of the award is to help showcase an author’s work to publishers and agents whilst also highlighting their rights licensing potential. As well as receiving a professional written critique, the chosen work is featured on a special promotion. Details of the book are sent to over 50,000 publishers and agents in over 90 countries.

“Waffen SS Britain is an interesting counterfactual novel, in a similar vein to Robert Harris's Fatherland. Although it's a premise that we've seen before, the author takes a thoughtful and considered approach that I really enjoyed."

In other news Simon Williams latest title ‘The Kite Who Was Scared of Heights’ has had its foreword written by Chris Martin of Coldplay, generating considerable interest through both traditional and social media.

If you would like to receive help publishing your manuscript, with the media, sales & marketing, entering competitions, promotion and making money from your work, then either reply to this message, email info@newgeneration-publishing.com or call 01234 711956.