A lovely stroll down memory lane

Author V.P. Hall gets a great spot of publicity in the Northern Echo last month with a review from Chris Lloyd as part of their 'Looking Back' supplement.

"An evocative book about a County Durham childhood in the 1930s and 1940s. 'I grew up in a village in a county of coalmines with huge heaps of coal slag in green fields next to farms.' says the author in his introduction. 'Dour beaches and moorland lay at its east and west extremes and a beautiful cathedral city at its heart'. The names of the people and places have been changed, and part of the fun of the book is guessing which village is which, but it is unmistakeably a coalfield childhood. The central character is Harry Blackberry, whose family have the Three Horse Shoes pub. This is his description of the preparations for the annual leek show: 'The prizes are set out in the smoke room and a trestle table has been erected for the giant vegetables to be laid on for the judge to measure. The prizes include a carpet, a kitchen cabinet, a canteen of cutlery, a standing lamp, a set of darts and a frying pan... and so on down to the booby prize, an alarm clock with timpani on top for the pair of smallest leeks in the show.' And then there's the lovely story of his appendectomy where Harry came round to find 'sticking out of my wound was a piece of orange-coloured rubber pipe with a giant safety pin through it. This same pipe I later recognised in science lessons attached to Bunsen burners'. The pipe was to drain his insides, and the safety pin was to stop the end of the pipe slipping inside and getting lost. 'I have the most abominable scar,' says Harry. 'It looks as if someone had hacked me with a sharp metal beach spade. However, I am grateful to the doctors and staff at the RVI. They must have pulled out a few stops to save my life. Then there was the other stuff they pulled out. Apparently I hadn't gone to the toilet for weeks'. This lovely stroll down memory lane is available on Amazon." 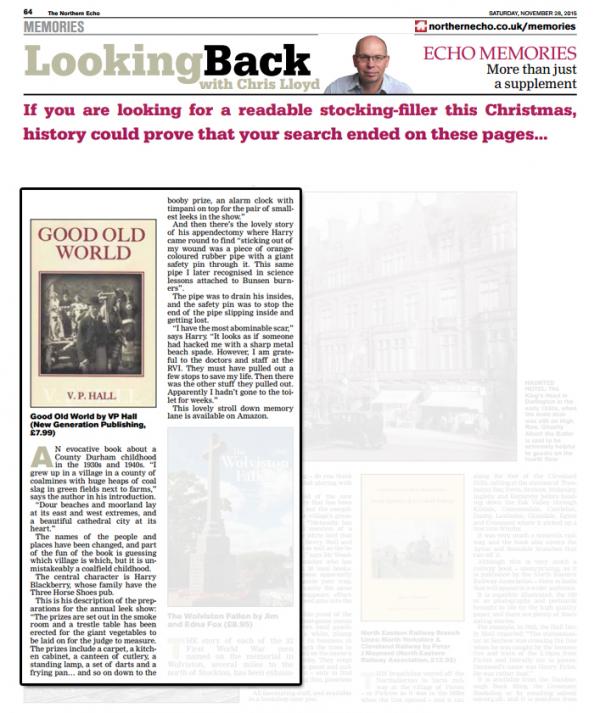 You can find this book on Amazon by visiting http://www.amazon.co.uk/Good-Old-World-V-Hall/dp/1785070665 or buy direct from our bookstore