Romance and drama at full steam ahead in Maiden Voyage, a new historical novel from New Generation Publishing's Roger Harvey. Sweeping you from Newcastle to New York aboard Tyneside's most famous ocean liner, the book will be launched alongside Turbinia in Newcastle's Discovery Museum... 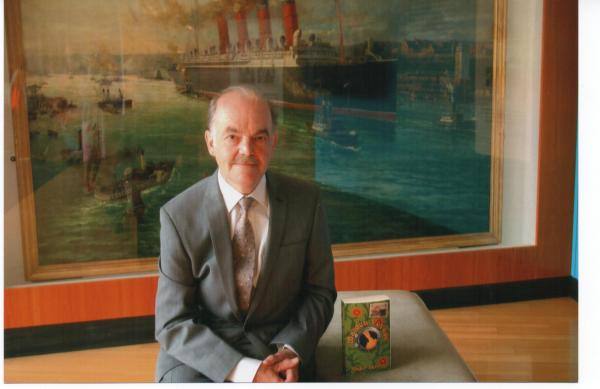 Tyneside, 1904. Elegant Edwardian houses ring to sounds of celebration; in the brutal clang of the shipyards, work begins on what will be the biggest and fastest liner yet to cross the Atlantic, transforming lives along the river and beyond. A privileged young engineer marries a brilliant feminist artist but falls helplessly in love with a girl from the shipyard drawing-loft; Russian agitators arrive to preach revolution; a door concealed in the ship’s exquisitely carved panelling hides a terrible secret; then Mauretania--with the lovers aboard--steams for New York at record speed and into the storm-lashed, nail-biting climax of this sweeping saga of passion and power, luxury and lust…and a world-changing invention is conceived in a North Shields fish-and-chip shop. Well, this is fiction.

But writer Roger Harvey’s latest novel is securely based on the amazing facts of building Mauretania at Swan Hunter’s Wallsend shipyard in the turbulent early years of the Twentieth Century.

“This was the world’s biggest and most luxurious ship and everyone on Tyneside was passionate about her,” explains Roger. “She was powered by the revolutionary new steam turbine engines, invented locally by Charles Parsons, so Geordie pride was running at full ahead on this job. The river communities had seen nothing to equal her construction and launch, and she carried brilliantly inventive Tyneside expertise around the world in a long and glorious career, holding the transatlantic speed record--the coveted Blue Riband--for twenty-two years. Her story alone is fascinating; stir in the lives of people involved in her creation and you have a saga that I hope will thrill and entertain the readers.”

Roger may have rooted the story in historical facts of the glory days of Tyneside shipbuilding and the political tensions of the period, but the long-established writer—this is his 7th-published novel and he is well-known as a poet, playwright and scriptwriter—gives his readers a novelist’s rollercoaster ride. Lovers from very different families cross barriers of class and upbringing and break all the rules to seize a chance for happiness; then--while Europe marches towards war and revolution--the gripping climax of a thriller develops as the great liner approaches New York. A Newcastle engineer has invented something even more powerful than the steam turbine and the Russians and Germans want it before war starts! 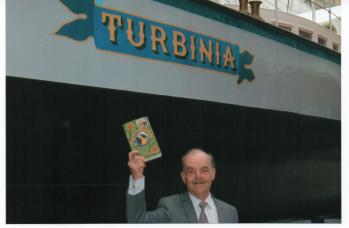 Maiden Voyage is a thrilling, romantic, fast-paced read, but it has taken longer to produce the book than it took to build the ship.

“I had been working on this idea for many years, having to postpone its completion in order to cope with other writing projects, but my new wife became an enthusiastic proof-reader for this job and her gleeful insistence on knowing ‘what happens next’ helped me finish the text and prepare it for publication as what I hope will be a real page-turner. There is certainly plenty of action and excitement in Maiden Voyage; it also contains a passionate and powerful story of love triumphing against the odds which I hope I have told with realism and honesty. Anyone who knows Newcastle and the North-East should be fascinated to follow the plot through many familiar locations. Fenwick’s department store and Pumphrey’s coffee-shop, Alnmouth golf-course, Tynemouth Long Sands and North Shields Fish-Quay are just a few.

I grew up Newcastle so many years ago it still looked and felt Edwardian, so many of my childhood memories have contributed to the atmosphere of the book. My maternal grandmother was a girl in Edwardian North Shields and her family was much involved with local shipping; the colourful tales she told me about life in that period also feature in the story. It has meant a lot to me to be able to celebrate these things.” 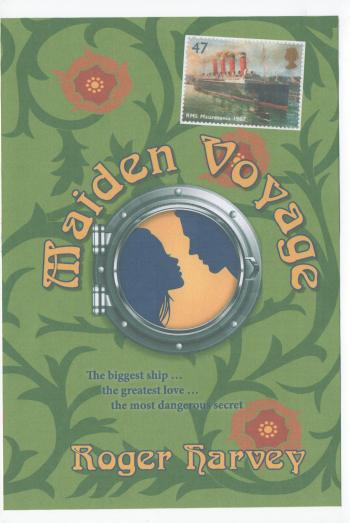 Roger is delighted that his latest book is to be launched alongside Turbinia, the world’s first steam-turbine ship, once the fastest vessel on water, now displayed in Newcastle’s Discovery Museum.

“If I hadn’t visited Turbinia in her rather ghostly quarters at the Science Museum of long ago in Exhibition Park I might never have written this book. I was hugely impressed as a boy, standing beside this famous ship, so important in history and suddenly in a room on the Town Moor. I remember my father explaining how a turbine worked, saying ‘something that goes up and down has to stop and start, but something that goes round and round can go faster and faster.’ It might have been simplistic physics, but it couldn’t have been a neater explanation of how a turbine outclassed a traditional reciprocating engine. I never forgot that, loved the idea of local inventor Charles Parsons making his little ship steam faster than anything else on water, and I have tried to put that kind of excitement into this book. The perfect location for its launch is Turbinia’s magnificent new home in the Discovery Museum. I’ll be very proud to stand at her sleek bow and help to celebrate the brilliant ingenuity of Newcastle inventors who really did change the world. I hope lots of people will come along to share that feeling and to enjoy an entertaining new book.”

Maiden Voyage , ISBN 9781787193574 published by New Generation, is available in paperback from Amazon UK or via other bookshop orders. The e-book version can also be downloaded from Amazon UK.

Maiden Voyage will be launched at the Discovery Museum, Blandford Street, Newcastle upon Tyne, from  2pm to 4pm on Saturday, September 9th, 2017. First Edition copies signed by the author will be available.

Roger’s website at roger-harvey.co.uk has details of his work and his other books.