Has this Alexander the Great Mystery Been Solved by a Local Author?

Fiveways author Lucy Caxton Brown penned much of her latest work, Alexander, A New Theory on an Ancient Legend, while sitting in her garden. Her books aim to solve historic and ancient mysteries and can take up to five years to research. So what will the next book be about? ‘Unfortunately I can’t say exactly because I’ve only just begun the research. You see I am never quite sure where it will all lead but the story will probably centre around another Egyptian mystery that has yet to be solved.’ Lucy’s latest book certainly has all the ingredients of a mystery thriller. ‘My aim is to involve the reader in analysing the evidence so that we solve the mystery together.

In Alexander, A New Theory on an Ancient Legend; we are dealing with a ninth century break in to the Great Pyramid by Caliph Al Mamun. He found a statue and inside was a man wearing a gold breastplate that was covered in gems. His weapons lay by his side and included a fabulously fine sword and shield. Someone had placed a huge ruby on his head indicating that this man was royalty. Egyptians were not usually buried in their armour but we are told that Alexander the Great was. So if this was Alexander, who put him there and why? To find out I have explored ancient legends, documents and medieval paintings. What I found was truly astonishing and leads to, what I believe could well be the final resting place of Alexander the Great. Alexander, A New Theory on an Ancient Legend offers up a new hypothesis as to what may have happened to Alexander the Great many centuries after his death. 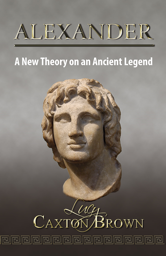