Former football club Chair, actor and author Michael Bearcroft has announced an exciting new partnership with the charity ‘Hope for Justice’, whereby £1 from every sale of his re‐released novel Dangerous Score will go directly to helping combat modern slavery.

Estimates suggest that over 21 million people are living in modern slavery today, with over 10,000 of those living in the UK. It is also the third largest source of illegal income, only exceeded by drugs and arms trafficking. As Anti‐Slavery Day approaches on the 18th October, author Michael Bearcroft has re‐released his successful novel Dangerous Score which explores the world of corruption, organised crime and human trafficking, pledging that £1 from every book sale will go directly to Hope for Justice.

Following an early career as a junior footballer for Sheffield United, Michael continued to be involved in the football industry for many years, as the Chairman of Corby Town F.C and sponsor of both Rothwell Town F.C and Kettering F.C. It therefore seemed logical that the sport he knows so much about would feature as the backdrop for Dangerous Score.

In the book, Michael brings together the worlds of football and organised crime as they collide and become entwined in a bloodthirsty, bitter tale of love, lust and murder. When successful footballer Jason Clooney’s wife unexpectedly leaves him in Australia, he returns home to the UK to start a new life in Sheffield. A winning goal catapults his home team‐ Kettering Town Football Club‐ into the national spotlight. However, a brief encounter with a mysterious woman called Jess, propels him into the underworld of international organised crime and human trafficking, changing his life forever.

Michael began researching human trafficking whilst writing his novel and was astounded at the sheer scale of the problem. He decided that he wanted to do whatever he could to help support those forced into modern slavery which led to his new partnership with Hope For Justice, a global charity founded in the UK in 2008 with the aim of working to end modern slavery and human trafficking.

In the past three years, Hope for Justice has rescued 350 people from human trafficking in the UK and is actively working to help many more.

"Human trafficking is a hidden crime and it’s happening all around us. The main character in Dangerous Score stumbles into this secret world and finds himself submerged in the underbelly of organised crime. I’ve partnered with Hope for Justice because I want to support and bring more light to the desperate plight of people around the world and in the UK. This charity is doing truly amazing things that are transforming people’s lives and I want to help let more people know about them so that collectively, we can do more to eradicate this truly heinous crime,” explains Michael.

Dangerous Score (£9.99, New Generation Publishing) was re‐released on 18th September 2017. It is available from Amazon and all good bookshops. £1 from every sale goes to Hope For Justice.

Sheffield‐born Michael Bearcroft’s passion for football began when he was goalkeeper for Sheffield United Juniors. This love for the sport continued for many years, with Mike becoming the Chairman of Corby Town F.C and sponsor of both Rothwell Town F.C and Kettering F.C.

His career was slightly more eclectic. A life in sales, marketing and company management resulted in Michael selling his company to retire at the age of fifty. He has also been Director of The British Red Cross, Chief Executive NPS HealthCare, Chairman of BHCA Services and Chairman of Kettering Radio Station. 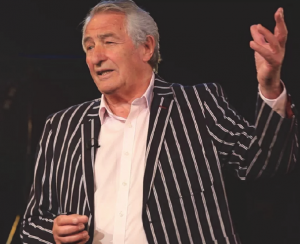 In a complete change direction Michel has also been TV and film extra appearing in Peak Practise, Casualty, Brum and many more. He also created a murder mystery company Murderous Liaisons before going on to train as a director of musicals and launching a musical theatre stage show Back to Broadway which toured major UK theatres.

Following a heart attack and triple bypass operation in 2012 Michael decided to move to Cornwall to concentrate on developing an idea for a novel that had been building slowly in the back of his mind for several years. After the untimely death of his eldest daughter shortly after making the move, he threw himself into bringing his novel to life.

Discovering just how big of a problem human trafficking is and the devastation it causes, Michael became a champion for the cause by partnering with registered charity Hope For Justice. He is also a passionate supporter of cornish bereavement charity Penhaligon’s Friends, which he has a particular affiliation to after losing his first wife in her 30s, leaving him as the sole carer and breadwinner for his two daughters.

Michael now works extensively as a Professional Public Speaker, delivering his popular 45 minute presentation ‘Variety has been the Spice of my Life’ which reminds people that anything is possible, if only you believe.

He is available for interviews, panel discussions and keynote speeches. For more information or to discuss bookings and availability, please contact Jenna Owen at Michael’s Press Team on 01603 743 363 or email jenna@mediajems.co.uk.

Most people think of ‘slavery’ as something from the past – an evil institution that’s been abolished and consigned to history. Actually, more people are trapped in slavery today than any point in history. There are tens of thousands of victims in the UK alone, trafficked into sexual exploitation, forced labour or domestic servitude.

The charity Hope for Justice has helped hundreds of victims of trafficking, who have often been beaten and abused; others have had threats made against their families. Earnings are kept by the trafficker to pay non‐existent bills for transport, housing and food.

The charity trains the police and others to spot the signs of modern slavery and respond, and also works with businesses to protect their operations and supply chains from modern slavery.

Hope for Justice depends on the support of ordinary people like you for fundraising, campaigning and awareness‐raising about this terrible issue.