Alan grew up on industrial Teesside, an offshoot of the post-WWII ‘Baby Boom’. Schooling was undertaken locally up to secondary modern school leaving age, to continue at Scarborough School of Art until the mid 1960’s. A three year spell abroad followed with a spate of divers jobs, latterly in the newspaper business on classified advertising accounts with a short spell actually designing layouts for displayed advertisements.

Fleet Street beckoned, with a variety of jobs with the newspapers, magazine and book distribution, advertising and associated duties within the industry between Butterworth’s on Kingsway and Telegraph Newspapers, finally being laid off at Canary Wharf.

A flurry of short term jobs bridged the gap between the printed and the posted word. Royal Mail provided stability... at a cost. In those days when e-mailing was in its infancy mail bags burgeoned, Alan found his ‘niche’ on mechanical sorting, night duties paying extra to fund motoring holidays... and a dream. Buying a laptop was a way out of typos, bins full of discarded A4 paper.

All it needed was the ‘spur’, which Alan found in reading an interview in a tabloid with singer James Blunt, in which he mentioned a forebear who was related both to King Harold and the Danish royal dynasty of Svein Estrithsson... An idea germinated, characters formed, research undertaken. The result was RAVENFEAST - book one of a series of, perhaps ten. There’s enough mileage in the era.

You can follow the progress of the series as it develops on http://alancaster149.hubpages.com/hub/THE-RAVENFEAST-SERIES  or you could visit the Bookshelf, page 2 on: www.northworldsagasite.webeden.co.uk for a more detailed account. Alternatively find Alan on Twitter and LinkedIn, even pages on www.mybookbuzz.com/Alan-Robert-Lancaster

There are several ways of contacting him, by commenting on the RAVENFEAST page on Hub-pages, by Tweeting or comments on LinkedIn.  An e-mail address can be found on the Bookshelf page of the Northworld site to secure bookmarks or postcards to complement your book purchase.  His latest book an be found here. 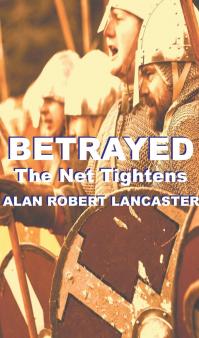